A history of the Rick Stein brand 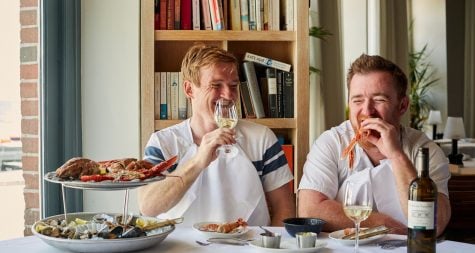 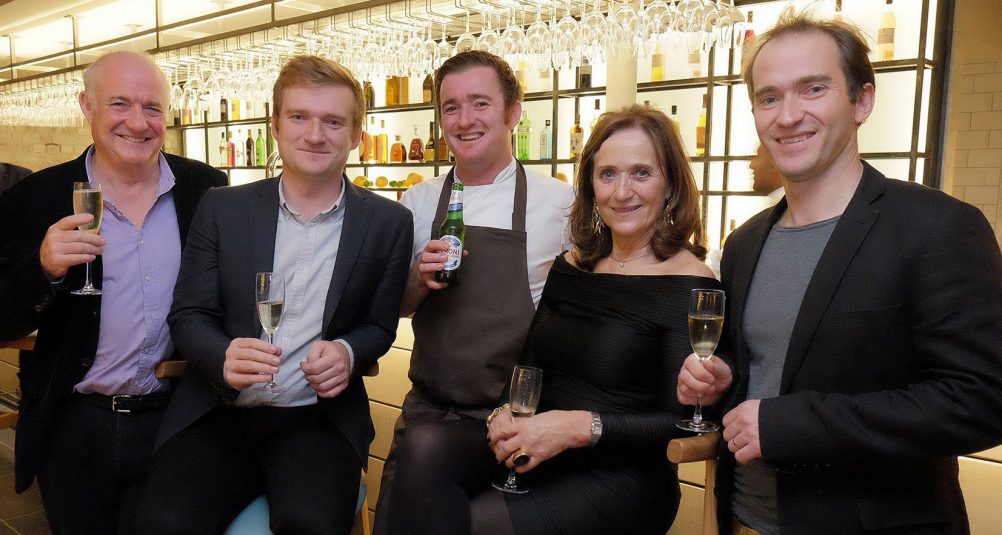 Our family business has been established in Cornwall for 45 years and we love what we do.

Our restaurants are more than just bricks and mortar with great food. It’s about the experience; the location, the view, the atmosphere, the feeling. We’re serious about food and we’re equally passionate about excellent wine and creating lasting memories.

From the beautiful coastlines and beaches of Padstow and Newquay in Cornwall to the enchanting heritage of Winchester there are plenty of reasons to visit us.

Our passion for fresh fish, simply cooked is stronger than ever and sustainability is an important part of our shared future. Find out what we’re doing to reduce the impact we have on the environment.

With the same style and luxury as the restaurants, our rooms and self-catering accommodation provide the perfect home away from home.

With the food scene thriving in Cornwall, there has never been a better time to join our team. If you are looking to develop your career in this industry, find out more here.

WHERE IT BEGAN – THE HISTORY

Rick and Jill bought the restaurant in 1974 as a nightclub, which didn’t last very long, owing to some problems with keeping law and order with a clientele of burly fisherman.

Little did Rick and Jill know when they opened a small seafood bistro on the harbourside in Padstow in 1975 with red checked tablecloths and candles in Verdicchio bottles that the business would grow to where it is today. Since opening in 1975, The Seafood Restaurant has established an international reputation for imaginative cooking of the very freshest fish and shellfish.

Rick and Jill bought St Petroc’s in 1988. It had been running as a simple hotel for about 5 years prior to that and before that it had been semi derelict for years. We added extra bedrooms by the purchase of St. Decamons next door in 1989. The bistro opened at the same time as the hotel and has grown slightly over the years specialising in bistro food from Britain, France, Spain and Italy.

The café in Middle Street started life in the original deli in 1982. After operating for four years, the café soon outgrew its small space above the deli, so Rick and Jill moved the café and introduced a much more substantial menu in 1994. There are also three comfortable rooms located above.

Rick and Jill moved the deli to a new building on South Quay in 2000, and turned the shop in Middle Street into an upmarket gift shop.

St. Edmunds House was bought in 2000 helping us to develop six luxury bedrooms which opened 1st June 2001. The rooms have a cool, minimalist feel, with oak flooring, double French doors and American shutters. Each room has been named after a local surfing beach.

We were joined by our Head Pastry Chef Stuart Pate in 2003, who helped us establish Stein’s Patisserie on Lanadwell Street, just a stone’s throw from Padstow harbour. It sells a wide range of freshly baked bread, pastries and cakes.

We bought Stein’s Fish & Chips on the South Quay in 2004. Rick always wanted a fish and chip shop, somewhere you can wander in, choose your fish and wait while it cooks. You’ll find a menu of cod and haddock together with a large range of local fish like hake, monkfish, John Dory and bass in batter and deep fried in beef dripping to make it really crisp. We serve homemade chips, mushy peas, curry sauce and our mayonnaise-based tartare sauce along with some nice wines and good beer.

In late 2007 we opened another 4 bedrooms at Prospect House just up the path from St Petroc’s, and our delightful Bryn Cottage which opened April 2007.

REFURBISHMENT AT THE SEAFOOD RESTAURANT

In 2008 we refurbished The Seafood Restaurant, changing the conservatory, opening the seafood bar and adding two extra bedrooms.

In 2009 we took over The Cornish Arms at St Merryn. We’re running it not as a gastropub but as the local village inn with great real ales from St Austell Brewery and good pub food like crab sandwiches, sausage and mash, scampi in the basket and prawn cocktail.

In March 2012 we opened a fishmongers in Padstow, Stein’s Fisheries, selling fresh fish, shellfish and pre-prepared seafood dishes, as well as lobsters, crabs, fishcakes, seafood salads, fish soups along with salmon, prawn and crab sandwiches. The shop is located next to Stein’s Fish & Chips on South Quay.

Three coastal inspired properties surrounded by peaceful green pastures in the charming village of Trevone. Individually customised and designed by Jill Stein, with a homely feel and somewhere to kick off your shoes and instantly feel relaxed. Stay in our four-bedroomed house, Trenouth or one of our three-bedroomed houses, Crigmorrick, Porthmissen or St Cadoc.

In 2014 Jill lovingly restored and furnished this beautiful country retreat. Sleeping 8, this traditional Cornish cottage with pretty courtyard is nestled in the sleepy and peaceful village of Penrose, just 6 miles from Padstow. Read a book from the extensive library in front of the wood burning stove, relax in the TV room, unwind in the bathrooms or entertain in the dining area.

Our first move outside Cornwall. In 2014 we opened our seafood restaurant in Winchester. Winchester was a natural place to move to, it’s steeped in heritage with beautiful architecture and has a love of great food.

In April 2015, we opened a restaurant in Fistral, Cornwall. The restaurant is located on the iconic Fistral beach, famous for being one of the best surf beaches in Europe with a long sandy stretch perfect for families and offers a selection of classic fish and chips as well as curries inspired by Rick’s travels in India and the Far East.

We have opened a casual seafood bar to sit alongside our fish counter where you can soak up the atmosphere of a working local fisheries, whilst tucking into some of the best seafood from our shores and some of Rick’s favourite wines.

In July 2016 we opened Ruby’s Bar on Broad Street, just around the corner from St. Petroc’s. With access to the bar from the Bistro, we wanted the bar to be a place for pre-dinner drinks, an afternoon gin and tonic, or an evening cocktail. Ruby’s Bar was designed by Jill Stein, son Ed and his wife Kate.

In October 2016 we opened a restaurant in Marlborough. Here you can enjoy some of Rick’s most iconic dishes such as Dover sole a la meunière and turbot hollandaise as well as a selection of new dishes including salt pork belly with split pea puree and sauerkraut, and baked guinea fowl with garlic beans and smoked sausage.

In October 2016, we acquired our first restaurant in London, overlooking the Thames and continued to employ the full 40-strong team and ran the restaurant as it was until the end of the year, before starting a refurbishment in early 2017.

RICK STEIN: THE ROAD TO MEXICO

Road to Mexico is inspired by a journey that he made in late 60’s, so expect to hear lots of nostalgic tales of how the countries have changed over the years and how the food has developed. It’s a classic Rick series and book – vibrant dishes, travel tips and a dash of art and culture thrown in for good measures from San Francisco in California down to Oaxaca in Mexico.

JACK STEIN: WORLD ON A PLATE

Jack’s debut cookery book, World on a Plate, was published in July 2018. It combines his culinary experience from working in our restaurants, travels around the world and passion for British produce to create 100 dishes to enchant and entice home cooks. Order it here.

Rick’s Secret France series (and book) saw him travel from Dieppe in the very north of the country, winding his way down to Cassis in the south – always on the look out for exciting new recipes and produce to cook with (or drink).

At the end of June 2020 we launched Stein’s at Home. Our way of delivering RIck’s much-loved recipes nationwide – three course meal boxes that are simple to finish at home and use great quality restaurant ingredients like lobster, scallops, mussels are more. The collection now includes breakfast, cheese & charcuterie and afternoon tea boxes. Find out more here.

When we reopened our restaurants after the first lockdown we introduced the Rick Stein app. A safe and simple way to use our menus and pay on your phone. Download it here.

Inspired by our expert fishmongers in Padstow, you can now order the freshest catch straight to your door to cook at home. From fish fillets and whole fish to shellfish and mixed boxes, with plenty of cookery inspiration in the form of recipes and how-to guides from Rick and Jack. Find out more here.

Rick’s new book, Rick Stein at Home, will be published on 16th September 2021. It celebrates recipes, stories and memories from his kitchen at home and includes a few dishes from his popular BBC2 series, Rick Stein’s Cornwall. Pre-order here.

Dine within our restaurants brimming with character, and enjoy seasonal food inspired by the sea. Starting from breakfast and running until late

Stay with us in one of our small, private properties scattered across Padstow or our self-catering properties just a short drive away in the Cornish countryside.

Our cookery school is closed this summer, but we’re taking bookings from 1st October and can’t wait to see you in the kitchen again soon.

Buy Stein’s at Home menu boxes – prepared and ready for you to finish at home, plus gift vouchers, homeware, hampers, and wines chosen by Charlie Stein too.