A trip to Cornish Orchards 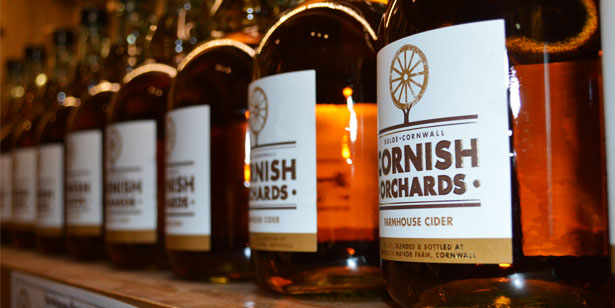 We are very lucky to work with some great suppliers in Cornwall and recently we went to visit one of them at Westnorth Manor Farm, Duloe, Cornwall.

Cornish Orchards are a cider farm that have been making cider since 1992 after Andy Atkinson arrived at the Duchy of Cornwall farm with his herd of cattle. The farm started with 3 orchards being planted by Andy, which soon led to be one of the largest collections of Cornish apple varieties in the county. After working with the apples from his farm to create his first apple juices, Andy made the decision to branch out and create his first Cornish Orchards cider.

Two decades later, Cornish Orchards are producing and bottling a host of different ciders and soft drinks on their farm. As well as learning about the fascinating history of Cornish Orchard cider, we also got to see how it was made and bottled on the farm.

After a morning seeing how the cider was made, it was time to do some tasting! We tried an array of ciders from the Farmhouse Cider to the Blush Cider, made from raspberries and dessert apples, and learnt all about the different types of apples that go into the ciders as well as some top tips for pairing with dishes that we could take back to our restaurants.

We’d like to say a huge thank you to Cornish Orchards for hosting us for the day. You can buy a variety of their Cornish ciders at Stein’s Deli or try them in our restaurants, just ask a member of staff if you’d like some help deciding which will suit your menu choice.

If you are a keen cider lover, make sure you come along to our Beer & Mussel Festival on 21st & 22nd March, which features over 40 different beers and ciders including Cornish Orchards Vintage and Pear cider.