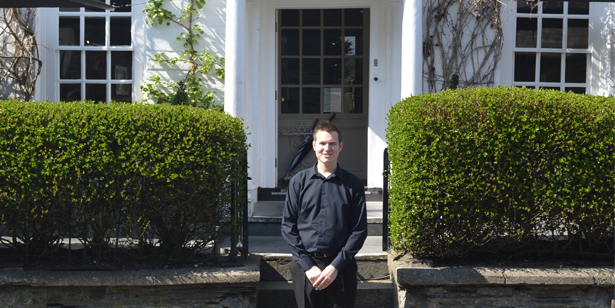 The London Marathon takes place on the 26th April and Tom Brewer, our reception host from St. Petroc’s Hotel & Bistro has been training hard for the last 12 months to take part.

Tom has never run a marathon before and has been training along the Camel Trail and around North Cornwall following a strict training regime before he runs the 26 mile marathon through London.

He will be running the race in memory of his father, Roger Brewer, who passed away in September 2007 from a form of Leukaemia. This year is a special year for Tom as it marks what would have been his father’s 50th birthday. Roger was an active figure in the local community. As well as being a councillor and in the coastguard for St. Merryn, he was a keen member of the local darts, snooker, rugby and pool team – his cue can still be found displayed on the walls of The Cornish Arms.

Alongside his training, Tom has been raising money for his chosen charity, Leukaemia Care, holding a fundraising pub quiz and collecting donations from colleagues, family and local businesses.

Tom says “I’ve never run before so it’s been a challenge, the hardest part has been sticking to my training regime – now I just can’t wait to be there to complete the marathon and cross that finish line!”

We’ll be watching out for Tom on Sunday 26th April, you can track his progress with his number 41033.