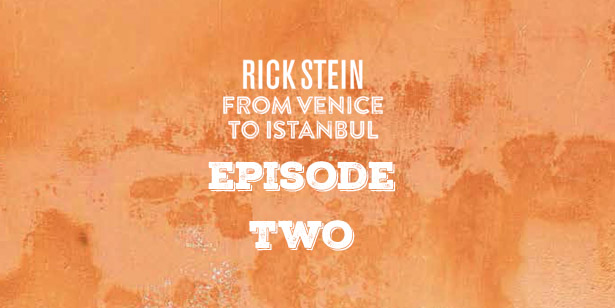 This week, Rick leaves Venice and sets off to Ravenna in Italy where he tries his first dishes of the episode, cresceone con verdura and piadina con prosciutto, flatbreads made to order and filled with rugola and squacquerone, a soft cheese.

Next Rick meets Angela Schiavina, who prepares passatelli, a rich beef stock with lots of Parmesan and bone marrow.  A ferry ride to Split sees Rick visit the fish market and go for a swim, before heading to the Zlatna Ribica bar in Bosnia where he tries fritto mistro, a mixed selection of fried seafood.

The series takes us back to Rick’s kitchen on the island of Symi, Greece, where he tries his hand at cooking scampi alla busara.

Next, in the Monsor mountains, Rick meets with a local restaurant who specialise in spit-roasting lambs. The restaurant is legendary in Croatia and is lined with photos of the family with stars from abroad and celebrities. They cook a veal peka for Rick, cooked on the embers of a wood fire in a peka, a pot-roasting dish with a domed lid that can be covered with hot coals so the food cooks from above as well as below.

Back in Rick’s kitchen in Symi, he starts cooking pasticada, a pot roasted beef dish with red wine, prunes and bacon. Then we return to Split where Rick visits the daily Pazar market with a host of fresh ingredients. At Villa Spiza, Rick meets sisters Ivana and Nada Gamulin and their best friend who cook fish brodetto with borlotti beans, a fish stew made in two hours over several glasses of Caric red wine.

Rick meets with history teacher, Dino Ivancic, at the Diocletian Palace, considered one of the main attractions on Split. Then at the Dioklecjan Bar, Rick tries tripe and prosciutto, before taking a ferry from Split to the island of Korcula. Here Rick meets Biliana who makes kid goat stew with peas to serve at her restaurant that evening.

Next in Korčula, Rick muses on the birth place of Marco Polo and how this has given the place a chance to stake a claim. Toni Luzica, who works on the island  in a boutique hotel called Lešić Dimitri Palace, cooks Rick a Croatian green stew called zelena menestra, a dish with smoked pork and cabbage.

We return to Rick’s kitchen in Symi where he prepares walnut crusted pork chops with figs, making a paste out of chopped walnuts, cinnamon, nutmeg and olive oil to coat the chops before frying themin butter and adding dried figs, butter and white wine to make a pan sauce. The dish has been inspired by Karen Evenden, an ambassador of Croatian cooking.

The final dish of the night is enjoyed on the beach of Bilin Zal, in a restaurant under the same name that has just opened for the summer season. The cook, Jelena, grills a dozen small bream over charcoal, which she serves up with a dish of lightly crushed new potatoes, green beans and olive oil.

You can find all of the recipes from Rick Stein’s new TV series in his cookery book From Venice to Istanbul. Buy it online here.

Be one of the first to try Rick’s new dishes in one of our restaurants. Book a table here.

Join Padstow Seafood School on their one day Mediterranean street food and mezze course, inspired by Rick’s latest travels. You’ll learn how to cook the prawns alla busara featured in this episode as well as other dishes including pizza bianco, oven-roasted chicken with sumac and the grilled mackerel baguette that Rick demoed on The One Show.