Rick Stein reveals his new book From Venice to Istanbul 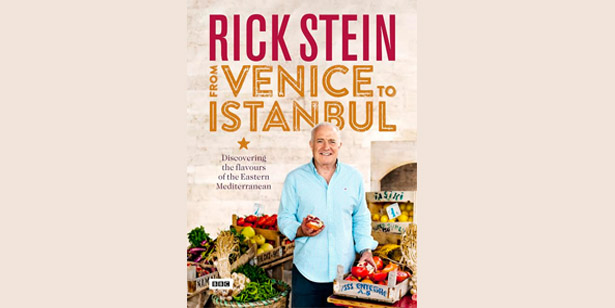 From Venice to Istanbul – A food journey through the Eastern Mediterranean will be published by BBC Books on 30th July to accompany a major new BBC TWO, 6 part TV series this summer.

Rick begins his latest foodie journey in Venice and from there travels to the mythical heart of Greece, to the Black Sea flavours of Croatia and the Eastern influences of Turkish food where he ends his journey in Istanbul.  In his new book Rick Stein: From Venice to Istanbul he shares over 100 recipes inspired by his journey.

Forever influenced by its past as part of the Byzantine Empire, the Eastern Mediterranean stretches from Venice to Albania, to Croatia, Turkey and the shores of Greece, and stands as a gateway between East and West. This melting pot of cultures inspires the unique and exotic character of its cuisine, which Rick blends with his own passion for fabulous produce, fresh seafood and authentic cooking. Using influences from the Middle East, North Africa and the Balkans, Rick will share recipes such as Garlic Shrimps with Soft Polenta, Sporki Macaroni, Turkish Dumplings, Split Belly-Stuffed Aubergines, and Albanian Baked Lamb with Rice. All the recipes are interwoven with Rick’s evocative descriptions of the tastes and smells from his journey.

Rick commented:  ‘So often in Turkey I kept thinking of how the flavours were almost like food from a parallel universe; the sharpness of yoghurt, so common in so many dishes, and it’s affinity to lamb; the lemony favour of sumac; the spiciness of red pepper; the plethora of fruit, nuts and cinnamon in rice dishes; the fondness for aniseed-flavoured drinks and smoky aubergines. The acidic and salty cheeses from sheep and goat’s milk, some matured in the skins of goats. Salads made from boiled wheat, grains flavoured with pomegranate molasses,pies made with crisp filo pastry filled with the same tart cheeses and wild greens gathered from the hillsides. The hot menthol flavour of wild oregano, a flatbread sandwich of cold lambs brains, red onion, tomato, parsley and chilli flakes, sold with a sour drink, salgam, of  fermented and salted purple carrot juice.’

Rick’s book will be released on the 30th July with the TV series to follow.

If you want to be one of the first to receive From Venice to Istanbul click here to pre-order your personalised copy.

If you would like to see Rick and ask him about his lastest adventure, why not join him on 30th July as he hosts ‘An evening with Rick Stein’ at Padstow Seafood School .