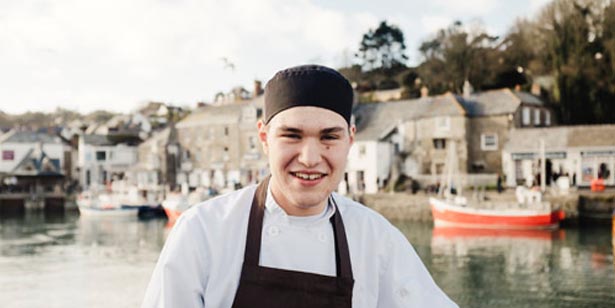 David Shrigley, commis chef at The Seafood Restaurant not only won the Mubaloo Flying Start award, but went on to be a finalist for the Prince’s Trust Award and was invited to the prestigious award ceremony in London presented by Ant and Dec on the 11th March including famous faces such as Simon Cowell, Kevin Spacey and Rod Stewart.

After a challenging childhood struggling with autism, 20 year old David was living on the streets in Wadebridge when he was referred to Get into Cooking, a Prince’s Trust programme at Padstow Seafood School. The nationwide scheme helps unemployed young people learn the skills, qualifications and experience they need to find work in the industry.
His incredible dedication and passion to learn saw David reach the top of his class, which led to a job at The Seafood Restaurant where he now works as commis chef learning from Stephane Delourme. David has recently been chosen to join our in-house apprenticeship programme at Padstow Seafood School, which will equip him with a level 3 NVQ in Professional Cookery.

David says it’s a huge relief to be working. “I’ve got a home, a roof over my head, an income of money. I’ve made lots of friends in The Seafood Restaurant and anything negative that was in my life, isn’t any more. ”