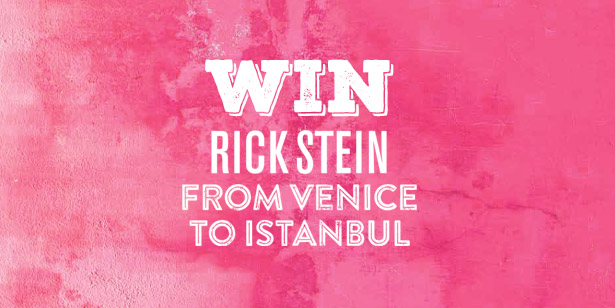 For your chance to win a signed copy of Rick’s new book, all you have to do is tell us your favourite moment during each episode. Whether it be a new recipe, funniest ‘Rick’ quote, or best cookery tip, we want to know what kept you entertained.

We’ll select the winners every Monday so if you don’t catch Rick on Friday night when the show is aired, you can catch up on BBC iPlayer and still be in with a chance to win.

T&C’s
One winner will be selected from Twitter and Facebook each Monday after every episode of Rick Stein: From Venice to Istanbul on BBC2 at 9:30pm until the series comes to an end. The winner will be contacted via the method they have given their answer (via Twitter of Facebook). This competition is in no way sponsored, endorsed or administered by, or associated with Facebook or Twitter. Competition only open to residents living in mainland UK. We reserve the right to withdraw prizes if entries are not deemed worthy winners. The Seafood Restaurant Ltd reserves the right to remove or disqualify any entry at any time at our discretion.